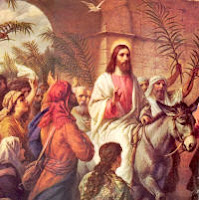 Palm Sunday brought yet another homily on the fickle people of Jerusalem who welcomed Jesus as king one week and demanded his crucifixion the following week.

While certainly this is a good reminder to examine our conscience, are we living or denying our citizenship in the heavenly kingdom?

Yet, is it possible that this is an injustice to the memory of the good citizens who may not have understood the nature of the Messiah (the Apostles didn't, how could they?), but welcomed him none the less?

If you read the scriptural accounts, there is no explicit statement that those who called for His crucifixion from Pilate, were the same people who had welcomed him to Jerusalem as king, those few short days before.

By way of analogy, and irrespective of your politics, was not George Bush welcomed to the presidency in 2000 and again in '04, in an almost victorious messianic fervor, the friend of the unborn, the future appointer of the SC judges who would overturn RvW? Yet today, do we not hear hue and cry from all quarters, perhaps not for crucifixion, but of impeachment, a bitter and vitriolic hatred which looks forward to the day he is turned out of office?

No, I submit to you, according to the interpretation of St. Augustine, that in the large city of Jerusalem 2000 years ago, there was a vocal population that hated Jesus when he rode into town, and before that vitriolic crowd those who had welcomed him as king melted away, as did all but one of the apostles. Jerusalem was big enough to have two such parties, just as we see in US politics.

I think it good that we examine our own conscience, and ask, as Elijah did, are we double minded? Do we say the creed, in which we affirm that we believe the Holy Catholic Church but not accept what that same Holy Catholic Church has to say with divine authority? This is a good and salutary examination, but I fear we go to far to cast such horrid aspersions on those who welcomed Jesus as king on that first "Palm Sunday."
Posted by Mark at 5:41 PM