Lourdes and the International Military Pilgrimage

The following is from the handout brochure: 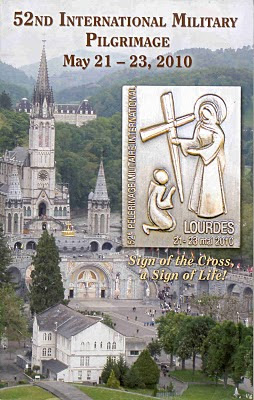 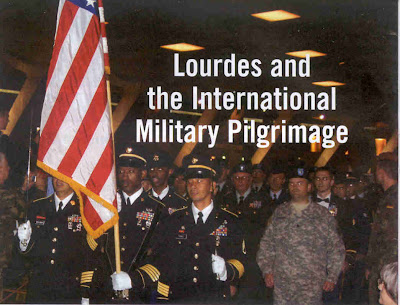 The history of the pilgrimage to Lourdes begins with Bernadette Soubirous, the eldest of nine children born to Francois Soubirous and Louise Casterot at the Boly Mill on January 7, 1844. She lived there for 10 years with her parents; they earned a decent living as millers, but were unemployed at the time of the Apparitions. During this time, they lived in an unused prison (the Cachot) in considerable poverty.

While out to collect firewood on February 11, 1858, Bernadette, who was 14 years old, paused by the river Gave. She became conscious of a wind, but noticed that the trees were not moving. At that point she saw a lady dressed in white at an adjoining cave (the Grotto). This was the first of 18 such visions, during one of which the lady identified herself as the Virgin Mary, under the title of the Immaculate Conception. During one of the apparitions, an underground stream was pointed out to Bernadette and she uncovered it. The message which the Blessed Mother gave to Bernadette was a call to prayer, to repentance and to pilgrimage. Bernadette passed on her experiences to the Parish Priest. Although there followed many false visionaries and some hysterical outbursts from others, Bernadette always showed an impressive dignity and forbearance. She entered the Convent of the Sisters of Charity in Nevers in 1866. She had always been a sickly girl and her asthma took a tighter hold. Bernadette described herself as "getting on with her job." When asked what her job was, she replied, "Being ill." She died on April 16, 1879 at the age of 35. She was canonized on December 8, 1933, not for her visions but for her humble simplicity and religious trustfulness.

Lourdes has been a place of pilgrimage for over a hundred years. So how did the International Military Pilgrimage (IMP) come about? According to the Historical Commission of the IMP, members of the French military started going to Lourdes during WWII (1942-1944) to give thanks to the Blessed Mother for prayers answered and to pray for peace. The actual beginning of the military pilgrimage as it is known today has been attributed to a gathering in Lourdes on December 10, 1944. On this day, French and Russian soldiers (to include soldiers wounded during the war), as well as military representatives from the British, Belgian and U.S. Armies, gathered in Lourdes for a Mass in the Rosary Basilica. In 1947, a German military chaplain, who had been a prisoner of war in France since 1944, was invited to participate discretely in a military pilgrimage held in September that year. German and Belgian soldiers participated in larger numbers for the first time in 1948 and many other countries soon followed. 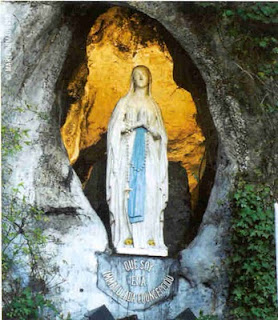 The official International Military Pilgrimage (IMP) was born in 1958, the year of the 100th anniversary of the apparitions. In 2009 over 15,000 military and civilian personnel from 34 countries as well as a detachment of soldiers from KFOR participated in the pilgrimage. This year marks the 52d anniversary of the IMP as well as the 152d anniversary of the apparitions. The pilgrimage will be presided' over by Msgr Luc Ravel, the military bishop of France and president of the IMP, along with the military bishops and head chaplains of the various delegations. The theme of the 52d IMP is "Sign of the Cross, a Sign of Life."
Posted by Mark at 5:49 PM