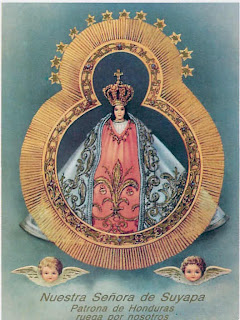 As forces of evil descend upon the nation of Honduras, let us join Honduran Catholics in our prayer to the Virgin of Suyapa:


Our Lady of Suyapa, bring the peace of your Son upon your land.

Last Friday evening, Cardinal Óscar Andrés Rodríguez Maradiaga, Archbishop of Tegucigalpa, read the message signed by all eleven Honduran Bishops on the current situation. Excerpts:
To the Organization of American States we ask that it pay attention to all that had been taking place outside the law in Honduras, and not only to what occurred after the past June 28 [date of the removal of the president by the military, following a court order].


The Honduran people wonders why the warmongering threats against our country [by Venezuela and other nations] were not condemned.
If the Inter-American system limits itself to protecting democracy in the ballot boxes, but does follow this by [the observance of] good governance, the prevention of political, economic, and social crises, reacting belatedly to them will serve to nothing.
...
To the international community, we express the right that we have to define our own destiny, without unilateral pressures of any kind, searching for solutions which promote the welfare of all.
...
Peace I leave with you, my peace I give unto you, Lord Jesus tells us. Not as the world giveth, do I give unto you. Let there be in you no anguish, nor fear.


[Signed by Cardinal Rodríguez Maradiaga and the other ten Bishops of Honduras]
After reading the full message on Honduran television, the Cardinal added the following personal message:

"An appeal to my friend, José Manuel Zelaya [the deposed President:] on the day on which you took office, you mentioned three commandments of the holy law of God: not lying, not stealing, not killing.


"Let us consider if a precipitate act, a return to the country, at this moment, could initiate a bloodbath.


"I know that you love life, I know that you respect life; up to this day [July 3], there has not been a single death of a single Honduran; please, ponder [this], because afterwards it could be too late."

The following links are articles which should clarify why the US should not be standing with the dictators to the south, but with the constitional government of Honduras:

A 'coup' in Honduras? Nonsense.
Don't believe the myth. The arrest of President Zelaya represents the triumph of the rule of law. (July 2, Christian Science Monitor)

Why Honduras Sent Zelaya Away The former president threatened to use force against the Congress and other institutions.(July 13, Wall Street Journal)


It appears to me that the reports of a "coup" are incorrect, and that what happened is in reality the prevention of an attempted coup. I am willing to examine evidence to the contrary.
Posted by Mark at 5:21 PM