I just finished reading this little book, and would recommend it: 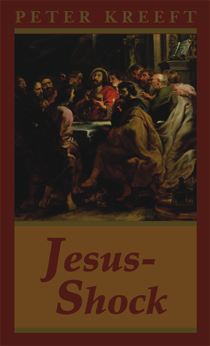 Jesus Shock is the second in a series of short works on seminal concerns of the impact that Jesus Christ made in the world. The first work, The Philosophy of Jesus (St. Augustine’s Press, 2007), explored philosophy in light of Jesus, rather than the other way around. The present work investigates the reception Jesus received both in His lifetime and continuously to the present time, not only from His enemies, but from His friends, a reception of shock, astonishment, even disgust. Perhaps a few remarks from the book best explains it:

This whole book is really about a single movie line, the greatest line in the greatest movie in history. Bet you know what it is. . . .

What was the bitterest controversy of the Protestant Reformation, both between Protestants and Catholics and between different Protestant denominations, the one that had both sides calling the other not just heretics but devils?

It was about the Real Presence of Christ in the Eucharist.

Jesus-Shock, in addressing this controversy forcefully and faithfully, shows the reasons why to this day the name of “Jesus” stirs up controversy, even revulsion, in polite society. In the true spirit of ecumenism, it also points the way toward a true rapprochement among His modern-day disciples.

Peter Kreeft is the author of many works in philosophy and theology, among them Socratic Logic, The Philosophy of Jesus, and The Sea Within, all from St. Augustine’s Press. He teaches philosophy at Boston College.
order here

I'm currently reading The Philosophy of Jesus (OK, I'm reading the titles backwards) and came across this little gem (speaking of the Holy Trinity):

In chapter 1, section 4. The Moral Consequences of Metaphysics, Kreeft writes: "We can see faint but definite indications of this even in our faint loves, if only they are definite. the lover finds his unity, his identity, his self, his "I," more in his beloved than in himself*.
---
*Were I a woman, I would say "her" unity and "herself." I will not say "his or her self" or "themselves" because abusing grammer is not reparation for the sin of abusing grandmas.

Although there are particular parts that I would definitely depart from Kreeft's judgments and conclusions (ie: he has an odd notion of Anglican belief regarding the real presence and his treatment of the mystical body of Christ is ... well it isn't, that's the problem I had with the book), I found "Jesus Shock" for the most part shockingly compelling, and would recommend a read. It's worth it just to take a test and fail miserably! So I better not go back to school and mea culpa on the grammer, gramma!
Posted by Mark at 7:10 PM