Recently I posted about the high altar which was built for the Cathedral in Boise but went to Utah instead (Got off the train in the wrong city), and followed that with a post about the missing side altars Boise's missing altar(s). now, "wbbruchhaus", an otherwise anonymous commenter, has posted the answer to the mystery!

Boise's main and side altars, originally diverted to Salt Lake City, in 1917 were shipped to the diocese of Lake Charles, LA, where they are currently serving at the Cathedral of the Immaculate Conception! Here's a picture that shows the high altar: 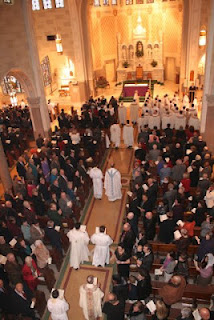 And here's a picture that shows one of the side altars: 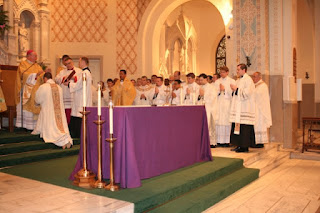 This picture gives a better appreciation for the size of the high altar. Taken during a Pontifical High Mass in the usus antiquior, celebrated by Bishop Provost, Dec 26, 2010. (Beaumont Enterprise, link) 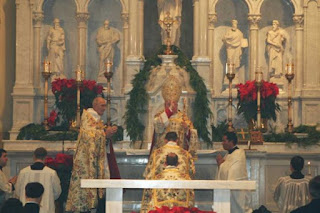 So, "wbbruchhaus", a sincere thank you for providing the links!
Posted by Mark at 9:47 AM