Got off the train in the wrong city.

The old high altar in Boise's Cathedral of St John the Evangelist has long puzzled many people for it's two flanking pillars, each topped with what appears to be a jar, or a vase. 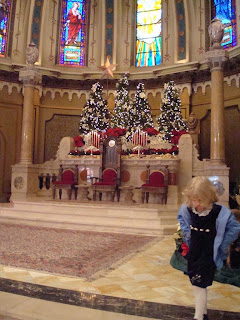 The explanation is that the altar was built by a company that at the same time built the high altar for Salt Lake City's Cathedral of the Madeleine. Both were shipped west on the same train, but Boise's was unloaded in Salt Lake City, and theirs went to Boise! Hence, Boise's high altar has the "alabastar jar of costly spikenard" motif to remind us of Mary Magdalene's unself-conscious and generous anointing of our Lord before his death.

The high altar that was built for the Cathedral of St John the Evangelist, Boise, was installed in the Cathedral of the Madeleine in Salt Lake City. It apparently fell victim to a post Vatican II wreckovation, I understand it was destroyed. It has, however, survived in photographic evidence (picture is from 1909).

So Boise, here's what we missed: 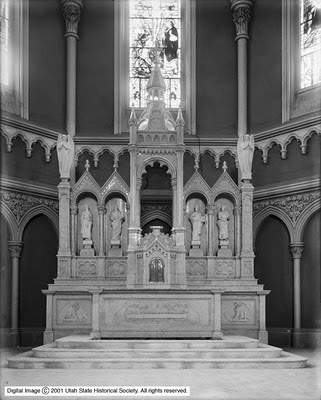 This copyrighted picture is from Utah State History collections, here

PS: Not only did Utah loose the high altar, even the stained glass windows behind the altar are gone, as this current picture attests: 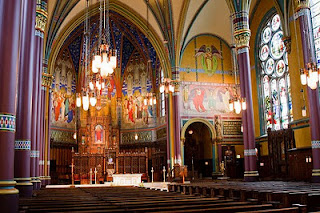