March for Life at Idaho's capital

I would say that this year's March for Life in Boise had a larger turnout than last year, in spite of weather that was cold and wet. The mass at the Cathedral before the march was standing room only; just 2-3 years ago it attracted only perhaps 200 or so. Parishes and the Knights of Columbus are to be commended for making organized efforts to bring people from out of town. Even the Franciscan Sisters of Adoration (from Pocatello) came, dressed in their lovely habits! A tremendous witness; the "ministry of presence".

When I took this picture, I was about mid-position in the march on Capital Blvd. I couldn't see either the head or the tail of the procession. Of course, I walk rather slow, so I started at the head and was about the last to arrive! I would hesitate to guess how many were present, but the turnout was good. The presentations were given at the steps of the statehouse. 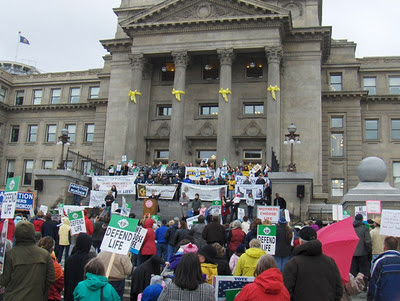 Of note was Brandi Swindell (Stanton Healthcare, Rock for Life) who reported on taking portable ultrasound equipment to Washington so children in the womb could testify to Congress!

I saw the Planned Parenthood (sic) advertisement in The Boise Weekly commemorating the day as well. It appears that the death merchants, are mathematically challenges as well as morally challenged; they got the number of years since Roe v Wade wrong!

A couple of the Dominican Lay members had a table at the Cathedral after the march to promote the "Cross of Rembrance", a memoral to children lost in the womb. More on that later!
Posted by Mark at 10:06 AM