This is a repost from last year, with additions! 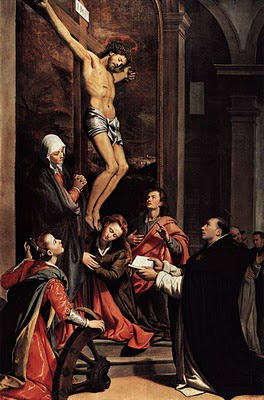 FAITH - REJECTING ONE ARTICLE OF

"To reject any article of the faith is to reject the faith itself. This is like pulling one stone out of an arch; it is like putting one hole in the hull of a ship. The whole arch tumbles down; the whole ship sinks. A man who has the faith, accepts God's word. Now, God's word has set up the Church as man's infallible teacher and guide. If a man, therefore, rejects one article of the faith, and says that he believes all the other articles, he believes these by his own choice and opinion, not by faith. Rejecting one article of the faith, he rejects the whole authority of the Church, and he rejects the authority of God who has set up and authorized the Church to teach truth. Hence, it is entirely incorrect to say that am man may have lifeless or formless faith in some article of the Creed while he rejects others; such a man has not the faith at all, living or lifeless." Thomas Aquinas, Summa IIa IIae Q5

Sorry, I lost the source of the above quote, which is based on the Summa, as opposed to IN the Summa.
edit 2/6/12 The quote above comes from "Tour of the Summa"


To continue the general idea of Faith, we can turn to the old Catechism's explanation of the article in the Creed:

"I Believe the Holy Catholic Church"

Finally, with regard to the Church, the pastor should teach how to believe the Church can constitute an Article of faith. Although reason and the senses are able to ascertain the existence of the Church, that is, of a society of men on earth devoted and consecrated to Jesus Christ, and although faith does not seem necessary in order to understand a truth which even Jews and Turks do not doubt; nevertheless it is from the light of faith only, not from the deductions of reason, that the mind can grasp those mysteries contained in the Church of God which have been partly made known above and will again be treated under the Sacrament of Holy Orders.

Since, therefore, this Article, no less than the others, is placed above the reach, and defies the strength of the human understanding, most justly do we confess that we know not from human reason, but contemplate with the eyes of faith the origin, offices and dignity of the Church.

This Church was founded not by man, but by the immortal God Himself, who built her upon a most solid rock. The Highest himself, says the Prophet, hath founded her. Hence, she is called the inheritance of God, the people of God. The power which she possesses is not from man but from God.

Since this power, therefore, cannot be of human origin, divine faith can alone enable us to understand that the keys of the. kingdom of heaven are deposited with the Church, that to her has been confided the power of remitting sins," of denouncing excommunication, and of consecrating the real body of Christ; and t)tat her children have not here a permanent dwelling, but look for one above.

We are, therefore, bound to believe that there is one Holy Catholic Church. With regard to the Three Persons of the Holy Trinity, the Father, the Son, and the Holy Ghost, we not

only believe them, but also believe in them. But here we make use of a different form of expression, professing to believe the holy, not in the holy Catholic Church. By this difference of expression we distinguish God, the author of all things, from His works, and acknowledge that all the exalted benefits bestowed on the Church are due to God's bounty.

FROM the Legion of Mary on the True Church:

Attacks on the Church on the score of evil-doing, persecution, and lack of zeal could be argued indefinitely, and hopelessly confuse the issue. An element of truth may underlie some charges, and thus add complication to confusion. To satisfy the hostile critic on these and all other minor points of dispute is completely impossible, even if great erudition is enlisted in the task. The course to be taken by the legionary must be that of persistently reducing the discussion to its very simplest elements: that of insisting that God must have left to the world a message - what men call a religion: that such religion, being God's voice, absolutely must be one, clear, consistent, unerring, and must claim divine authority. These characteristics are to be found only in the Catholic Church. There is no other body or system which even claims to possess them. Outside the Church, there is only contradiction and confusion, so that, as Cardinal Newman crushingly puts it: "Either the Catholic religion is verily the coming of the unseen world into this, or that there is nothing positive, nothing dogmatic whither we are going."

There must be a true Church. There can be only one true Church. Where is it, if it is not the Catholic Church? Like blows, ever directed to one spot, this simple line of approach to the Truth has over-whelming effect. Its force is manifest to the simple. It is unanswerable in the heart of the more learned, though he may continue to talk of the sins of the Church. Remind such a one briefly but gently that he proves too much. His objections tell at least as much against any other religious system as they do against the Church. If he proves the Church to be false by proving that Churchmen did wrong, then he has only succeeded in proving that there is no true religion in the world.

The day has gone when a Protestant would claim that his own particular sect had a monopoly of the truth. Nowadays he would more modestly contend that all Churches possess a portion or facet of the truth. But a portion is not enough. That claim is equivalent to an assertion that there is no known truth and no way of finding it. For if a Church has certain doctrines that are true and therefore others that are untrue, what means are there of recognising which is which; when we pick, we may take the ones that are untrue! Therefore the church which says of its doctrines: "Some of these are true", is no help, no guide for the way. It has left you exactly where you were without it.

So, let it be repeated until the logic penetrates: There can be but one true Church; which must not contradict itself, which must possess the whole truth; and which must be able to tell the difference between what is true and what is false.
And if there is still doubt, let John Henry Newman speak to your heart in his essay FAITH AND PRIVATE JUDGEMENT, and learn what that saving faith consists in.
Posted by Mark at 6:00 AM