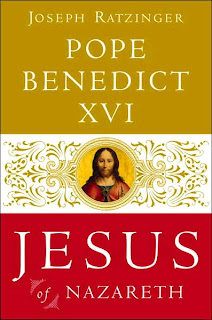 Although I purchased this book quite some time ago, its taken being confined to bed with the flu to start reading it. I must admit that reading in the introduction about "historical criticism" and the important contribution of protestant and irreligious scholars, sort of gave me a negative response; until I read that such leads down the wrong path without being conducted in the full context of faith and the Holy Scripture as a unitary expression of the Holy Spirit.

Although I'll return to work tomorrow, and my reading will slow down as a result (I'm about half way through the book), there have been a couple delightful insights which I was pleased to discover. The first was the Holy Father's heavy use of Jacob Neusner's A Rabbi Talks with Jesus, in order to place the Sermon on the Mount in the deep context of Jewish faith, as the expression of the New Law from the New Moses on the new Sinai. So, there's another book for my reading backlog [I just ordered one].

The second is a little linguistic surprise which was so obvious yet I'd never read or heard it before. Let's go back to the Praetorium, where Pontius Pilate is asking the mob who to release, Jesus, your king, or Barabbas, robber & murderer (sometimes rendered "revolutionary"). Turns out "robber" in the context of 1st century Greek is infused with the meaning of a "resistance fighter" and it was in this context that Barrabas had committed murder. It is even stated that historical evidence shows he was the leader of yet another resistance movement intent on driving out the Romans, a secular "messiah" who will save Israel and restore the kingdom. 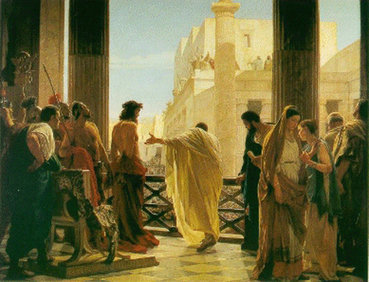 With that, look at the name: Bar Abbas = Son of the Father. Add to this an observation from Origen that prior to the third century, approximately half of the codexes in circulation name him "Jesus Barabbas."

The choice before the mob, was a savior who promised to drive out the Romans and restore the kingdom, and a Savior who promised suffering and claimed the Kingdom was already present. The Holy Father brings up Barabbas in the context of the third temptation of Jesus; "bow to me, and I will give you all the kingdoms..." This temptation remains with us today, doesn't it? In this light, I am more inclined to be understanding and join our Lord in saying "forgive them Father, they know not what they do."

It is good to reflect on which Jesus we are asking for...
Posted by Mark at 5:17 PM