Vatican City, May 21, 2010 / 08:00 pm (CNA).- Lourdes, France is this weekend's destination for thousands of military personnel and their families who will participate in the 2010 International Military Pilgrimage. Since 1958, the Shrine has seen soldiers from all over the world come in peace to venerate Mary.

The tradition of the International Military Pilgrimage (IMP) to the French Shrine of Our Lady of Lourdes began in 1958, after what was initially a regional pilgrimage and later national pilgrimage was made international to officially recognize the many NATO soldiers that had been arriving.

This year's 52nd pilgrimage takes place from May 21-23 and, according to organizers, will see nearly 12,000 pilgrims. An American outfit is represented in addition to 36 other delegations from as far away as Australia and Kenya and one formed of UN-mandated troops based in Kosovo.

Pilgrimage organizer and French military ordinary, Bishop Luc Ravel, spoke of the event saying that “the encounter brings with it the will of every military man of the world to work together for peace, the final good that we all seek. Also for a soldier, the use of weapons isn't the only way to promote peace between nations or within a people.”

“It's the conjugation of the force of weapons and the support of prayer that give the militaryman the dynamism and the openness to aim one day to achieve the good of peace,” he added, “without which the other 'goods' are reduced and eventually disappear.”

Major events planned for the three-day stay in the foothills of the French Alps, which will involve all military personnel, include a parade on Friday, adoration in the Basilica of Our Lady of the Rosary on Saturday and Mass in the Basilica of St. Pius X on Sunday before the group formation and farewell on the esplanade. Many other activities are set to take place within the individual national representations and languages.

Vatican Radio reported on Friday that Italy had sent 4,000 soldiers to Lourdes for the occasion, while on Thursday L'Osservatore Romano made note of a 15-member Swiss Guard contingent. Many soldiers will be staying in tent camps in the mountains during the pilgrimage.

I traveled to this event with the land contingent of a group sponsored by the North American Lourdes Volunteers. We departed Panzer Barracks, Stuttgart, on May 18 and arrived late the afternoon of May 19. We stayed at the Accueil Notre-Dame... 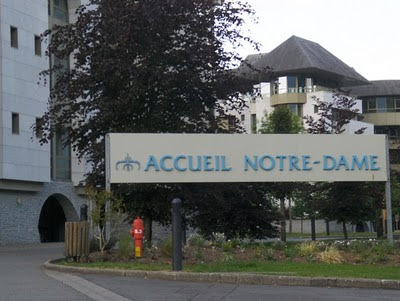 which is directly across the Gave river from the grotto where Bernadette Soubirous was graced with several visits from Our Lady. 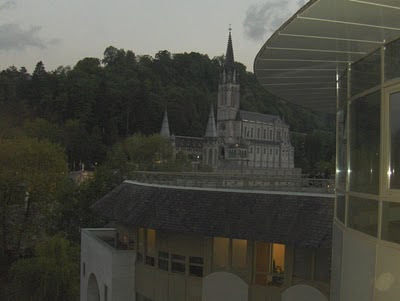 We went everywhere under the banner of the Chi Rho, which contained the phrase "MILITIAE DE JESU CHRISTI" - the name of a precursor organization which in 1285 became the Third Order of Preachers (Dominican Third Order). 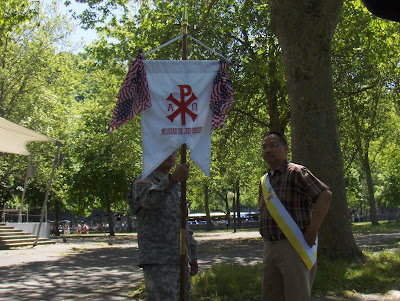 There were nightly rosary parades with increasing numbers of pilgrims daily: 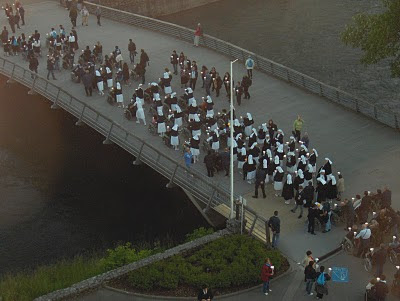 Unfortunately, my camera failed to be able to take pictures of any quality in the underground Basilica of Pius X; it was the first time I'd been to a mass with over 25,000 in attendance! quite a few moving events took place there. Highly recommend it! One was a Eucharistic procession, with these fine fellows in front of our Lord: 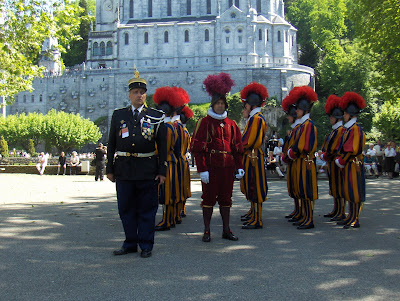 Unfortunately, a few days before the pilgrimage, I had fallen and stoved in my knee pretty badly, making getting around more than a little difficult. I was fortunate to have great guys of all rank push me in a wheelchair which we brought from Germany. 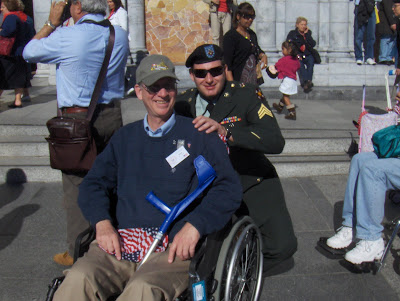 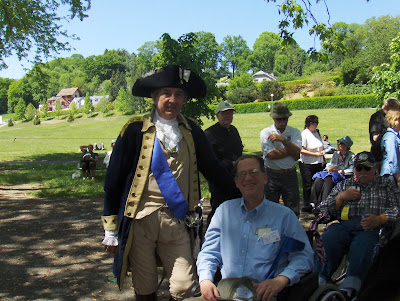 The wheelchair had it's advantages other than mobility, as this photo shows during mass for the English speaking forces at the grotto. BTW, that's Archbishop Broglio of the Military Archdiocese. 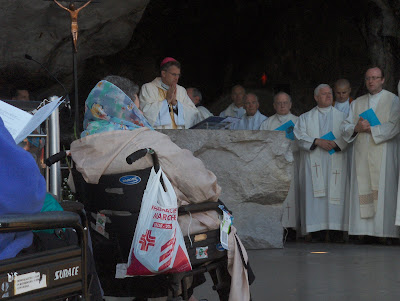 (not) sorry, no pictures from the baths. what an experience. Go!

Here's the whole North American Lourdes Volunteer crew (including the Steubenville kids who served us so well): 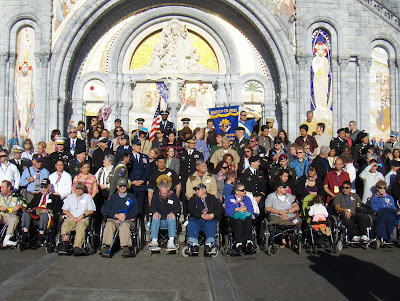 Many thanks to Marlene of North American Lourdes Volunteers and all the great folks who were on this pilgrimage, and to Maj. Paul O'Leary OPL who led the troops through the sea of people there! It's going to take a while to process all of this...


check out the official Lourdes site; many fascinating things to read!
Posted by Mark at 11:01 AM