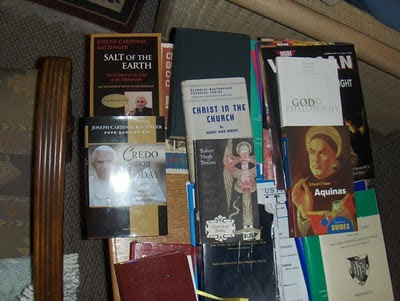 Anita (V-For Victory)recently asked me what I was reading. Since the answer includes more than one title, I had a hard time remembering all of them. So here's what my reading table next to the rocker has on it:

On the upper left is Cdl Ratzinger's "Salt of the Earth" given to me last year by Tony Galati OPL, who is president of the Dominican Lay Provincial Council and of KBVM in Portland. Fascinating read which I just finished. Also working on Credo for Today which is a bunch of Ratzinger essays going back to the 60s. Most of them are quite insightful. I'd recommend the first unqualifiedly, the second ... not quite as much. He did change, after all.

In the center lower is Robert Hugh Benson's Mystical Body, which apparently was a condensed version of Christ in His Church; I've finished the first and hope to start the second. Under the white book is one you can't see the title to, that is Fulton Sheen's "Religion without God (1928)". I ordered that at the recommendation of Fr. Brian Mullady OP after I told him I was reading Etienne Gilson's "God and Philosophy," a recommendation of Fr. Philip Neri Powell on his blog Domine, da mihi hanc aquam!. I thoroughly enjoyed the Gilson book, and also ordered Edward Fesler's book for Aquinas dummies (me). I still haven't bridged the gap between GK Chesterton's "The Dumb Ox" and the books by "philosophers" on Aquinas; and Aquinas himself confuses the snot out of me. mea culpa.

buried under the books are my 3 magazine subscriptions: Inside the Vatican, Homiletic and Pastoral Review, and Social Justice Review. I've subscribed to SJR for about 10 years, HPR for maybe 4 years, and added Inside the Vatican last year.

Then there are the daily reads: "Liturgy of the Hours" and "Divine Intimacy."


Missing from my books at home is one at the office; 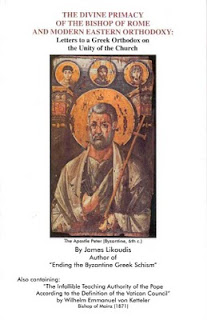 I'd recommend this and Jim Likoudis' companion volume "Ending the Byzantine Greek Schism" to anyone and everyone who wants to get past the most superficial understanding of the Eastern schism.

so many books, so little time!


Last night I finished "Credo for Today" and the final essay, "Why I am Still a Catholic" makes the book a thumbs up and a recommend. Written in 1971, it addesses those who stay in the Church without believing any of the Church's doctrine, in order to make over the Church in their own image. He also addresses the tendency to view it as "our church" instead of "His Church" - a balkanization into protestantized self-focused irrelevent and pointless congregations. A remarkable essay.
Posted by Mark at 3:57 PM