The March for Life in Boise had a good turnout despite cold and rain, and the speaker, David Gibbs, was outstanding.

While public awareness and rejection of abortion has been growing, unfortunately, public acceptance of death at the other end of the life spectrum has been growing as well. While folks have become aware of proposals for health care rationing and gutting Medicare to pay for the so-called health care reform, what they are probably unaware of is that killing the disabled and elderly has gone mainstream in America. 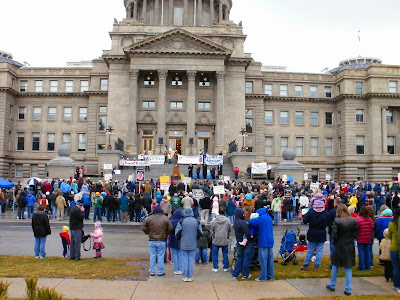 From the Blog Not Dead Yet, A Disability Perspective on the Issue of Physician Assisted Suicide - Disability and Health Journal, the following is quoted:

When assisted suicide is legalised most of the people who will die are disabled. And American disability advocates take a very dim view of it. This is the theme of a hard-hitting series of articles in the latest issue of the Disability and Health Journal.

The editor, Suzanne McDermott, of the University of South Carolina School of Medicine, writes that she changed her own mind after studying the issue. At first she believed that assisted suicide was solely a personal autonomy issue. But eventually she was persuaded that it is at the heart of the movement for disability rights: "Almost all people at the end of life can be included in the definition of ‘disability’. Thus, the practice of assisted suicide results in death for people with disabilities."

The special issue is a response to a controversial 2008 decision by the American Public Health Association (APHA) to back "aid in dying" (ie, assisted suicide). This slipped almost completely under the media’s radar, but it means that the official policy of the "oldest, largest and most diverse organization of public health professionals in the world" – 30,000 of them – is to support assisted suicide to the hilt. Or, as they prefer to call it in Oregon, "patient-directed dying" or "physician aid-in-dying".

Rather than worrying about some ambiguous language in the Obama administration’s health reform legislation or scrutinising the publications of his health advisors for a few indiscreet phrases, the elderly and their relatives ought to be worried about the 30,000 members of the APHA. They are the ones who could be sitting on the "death panels". The authors of the articles in the Disability and Health Journal certainly are worried.

That quote above is taken from Is death better than disability? by Michael Cook.

When assisted suicide is legalised most of the people who will die are disabled. And American disability advocates take a very dim view of it. This is the theme of a hard-hitting series of articles in the latest issue of the Disability and Health Journal.

so now we've reached the heart of the matter:

I encourage you to read this important issue of Disability and Health Journal with an open mind. The APHA did not support the Disability Section's opposition to an assisted suicide policy. The aid in dying policy was approved by APHA in November 2008, and in 2009 Washington became the second state to have a law legalizing aid in dying. There will be many states in the next decade that introduce or consider the introduction of laws to legalize assisted suicide. The issues are complex and the evidence is not robust. Some of the readers of Disability and Health Journal can use the manuscripts in this edition of the journal to help them understand the issues that will be debated in their state legislatures. We know there is another side to the debate, and this volume does not present the proponents' arguments, which have been presented in other journals. We thought it necessary to focus on the unique perspective to the disability community.

This assault on life has almost been completed. Apparently the difference between where we are today and where Germany was in the 1930s when it executed all the handicapped and other "worthless eaters," is that instead of the state doing it, we have become so hard hearted, that we are be doing it to our own ourselves.

Here's what Carol Gill wrote in the close of her article,

No, we don't think our doctors are out to get us: Responding to the straw man distortions of disability rights arguments against assisted suicide


Conclusion
In the end, those of us who oppose assisted suicide on political, economic, and cultural grounds are not afraid of the explicit and concrete menaces that proponents imagine we fear and then scoff at us for fearing. Nonetheless, as the movement to legalize assisted suicide gains support in our country's respected institutions and organizations, my sleep is definitely disturbed. No, I am not worried about doctors eagerly lining up to kill me, or family members plotting to get me out of the way. I do not imagine that a new Hitler will order my death in gas chambers or sadistic experiments. Please do not reduce my concerns to caricatures and stereotypes.

What I fear more than premeditated malice and any scheming executioner is the distant and off-handed dismissal of my quality of life that is seeping into our culture, simultaneously reinforced by and finding expression in the assisted suicide movement. It trickles down into the attitudes of everyday folks, people regarded as harmless, even powerless. If the legalization of assisted suicide continues, I believe the rank and file will some day see nothing wrong with hastening the deaths of many people. They will stand by and do nothing to stop it and will endorse the policies and institutions that advance it–not because they are evil people but because it will no longer be evil in our culture to do so. It will be compassionate, respectful, routine. Whom do I fear? I am afraid of the TV news copywriter who describes every disabled person as suffering, and of the HMO staff person who casually denies a critically needed support with the stroke of a computer key. I am terrified by the seemingly innocuous wide-eyed little medical student who interviews me when I enter the hospital—the one who exits our meeting filled with pity and curiosity, wondering how in the world someone like me can live. I fear the legions of these unlikely villains. Call me paranoid.

Reminds me of an old law school hypothetical: if a guy jumps off the roof, and you shoot and kill him as he rushes past your window, are you guilty of homicide? Answer: yes. Even though his death was immanent and inevitable, you unjustly deprived him of the remaining seconds of life he would otherwise have had; and the cause of his death was directly traceable to your unjustified action.