This from the Dominican Friars of the Eastern Province:


A relic of St. Mary Magdalene, first witness to the Resurrection, has come to US soil for the first time ever. Fr. Thomas Michelet, O.P. brought them from the Diocese of Frejus-Toulon, France, where the relics are kept in a cave in the custody of the Dominican Friars of the Toulouse Province.

The saint's relics are kept in the Grotto of St. Mary Magdalene, known as La Sainte Baume, where tradition has it that Mary Magdalene spent the last 30 years of her life. The relic--a piece of the tibia, or shinbone--is accompanied by a letter of authentication signed by the local bishop.

The cult of Mary Magdalene began to rise to prominence in the 11th century, and began flourishing in particular in the Dominican Order. In the 13th century, the Church set great store by the conversion of prostitutes, the most devout of whom where incorporated into communities of penitents by the bishops. These communities, which were given a Dominican constitution, took St. Mary Magdalene as their patron, as the saint herself was believed to have belonged to their ranks.

Charles II of Anjou, King of Naples, had founded the Basilica of St. Mary Magdalene in the town of Saint-Maximin-la-Sainte-Baume and strongly promoted the cult of the saint. Pope Boniface VIII put the basilica under the jurisdiction of the Dominican Order. In 1297, relics believed to be those of Mary Magdalene were discovered in the town's Church of St. Maximin.

That year the Feast of St. Mary Magdalene was first celebrated throughout the Order. It was thus that Mary Magdalene became a patroness of the Order alongside the Virgin Mary. The Dominicans honor her as the "Apostle to the Apostles" by virtue of her mission to announce the news of the Resurrection to Christ's disciples-a mission the Friars compare to their own.

For more background on Mary Magdalene, please click here. Fr. Michelet will talk about the relics on a special edition of "ETWN Live" on the Eternal Word Television Network Oct. 27 at 10PM EST. For more details, please click here.

On October 19, the relic made a brief visit to the Church of St. Vincent Ferrer in New York City before traveling on to Georgia.


Update: here's a photo Mike Lee took at the Grotto in Provence, France: 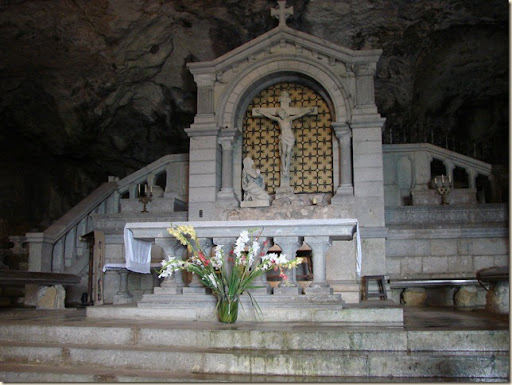 see Mike's post here for more pictures and information. Thanks, Mike!
Posted by Mark at 1:32 PM