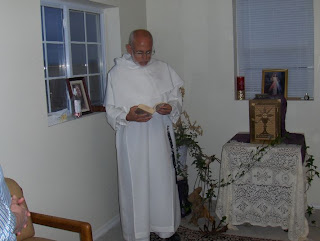 This is part one of four on my recent trip to Cuba. Were I to send it altogether, you may be discouraged from reading it all.

With much love and prayers,
Fr. Bart, O.P.


To Cuba and Back, 2009, Part I: Indecent Exposure Shocks Nun

Thank you very much for your prayers. My March 9 - April 3 loop through the cities of Guadalajara, Mexico City, Habana, Santiago de Cuba and Cobre (also Cuba), and then back to Mexico City and Mexicali, was one big miracle. There was no way all the good things that happened could have come about without many praying together. "If two or three of you join your voices on earth to pray for anything whatever, it shall be granted you by my Father in heaven." (Mt. 18:19) There were those of you who received my request for prayers by personal contact, and when I got back parishioners told me that our pastor, Fr. David Bello, O.P., included my trip in the Prayer of the Faithful of every Mass.

Thanks to the generous permission of the aforementioned Fr. David, I flew from Mexicali on Mon., March 9, to Guadalajara, Mexico. There my relatives had a family get-together so I could visit many at one time, and it was a very happy occasion. They are a cheerful lot, and because are all degreed in their various careers they are doing well despite the economic recession.

On Thurs., March 12, I flew to Mexico City, where the Missionaries of Charity met me at the airport and drove me to their convent where I was given a warm welcome, a nice, private room, and delicious meals. They are very well organized, and had asked me if I had a special diet. I told them that because of cholesterol I avoided red meat and shell fish, but could eat the white meat of chicken and turkey and fish. From the first day, I was given every part of the chicken cooked in many ingenious ways, but after some 10 days, I was pretty tired of chicken, and they were feeding me the dark meat of the chicken anyway. I even got chicken on Fri., March 13, and reminded Sister it was a Friday in Lent; they didn't repeat that mistake.

The convent's guestroom, in which I stayed, was next to the nursery for abandoned children. One mentally ill 6 y/o girl yelled all night, so I hardly slept.

On Fri., March 13, a lady friend of the Sisters drove me to the Basilica of O.L. of Guadalupe, where I prayed the Rosary before the 477 y/o tilma of St. Juan Diego (1474-1548). During my prayer, 24 priests in black cassock, white surplice and purple stole had a Liturgy of the Word and then processed down into the church and began hearing confessions. All 24 were still busy when my guide and I left the basilica (see http://en.wikipedia.org/wiki/Basilica, and http://www.google.com/search?q=basilica+de+guadalupe&rlz=1I7GGLJ_en&ie=UTF-8&oe=UTF-8&sourceid=ie7). She then gave me a tour of all the other holy sites in the Guadalupe compound. Though I had visited Our Lady of Guadalupe twice before, there was no way my heart could let me be in Mexico City and not visit the country's most important religious and civic site. Kneeling before the artistic masterpiece painted by heaven to represent Mary as a Latin American mestiza, a race that did not yet exist, I prayed for all of you. Then we went to a pharmacy where I bought earplugs so that the poor little girl's wails would not keep me awake this night.

The next morning, one of the Sister Rita, the guest mistress, wanted me to meet the child, so she called out to her. The little girl came out through the curtain stark naked. The shocked Sister tried to get her to go back, but the innocent orphan was so fascinated by the priest-visitor that she did not want to leave. Eventually Sister Rita's remonstrances intimidated the 9 y/o to disappear back through the curtain.

On Sat., March 14, I visited relatives in Mexico City, and we met at the Shrine of Our Lady of Remedies because it is near the home of my 84 y/o first cousin on my father's side, Dolores Ruiz Esparza. This large and very popular shrine houses a small image of Mary from Spain, brought over to invoke Mary's protection by a captain in Hernán Cortez's army of conquest. In the June 30, 1520, in the battle of the Noche Triste (http://en.wikipedia.org/wiki/La_Noche_Triste), as he fled with Cortez's army, the captain hid the image on a hillock in a small Aztec shrine. The image was found 20 years later, and the present church (http://www.flickr.com/photos/kalavinka/3264710514/) was finished in 1575 to house the statue, which has turned out to be miraculous.

Happy Feast Day of O.L. of Fatima and of Bl. Imelda, O.P.