I've had the pleasure to be able to attend the solemn vows of Idaho's native son Brother Boniface Willard O.P., professing with Br. Mark Francis Manzano O.P. at St. Albert Priory, Oakland, Province of the Most Holy Name of Jesus. better pictures were taken by his family, so I put my camera away after the entrance procession and enjoyed a tremendous sung mass (Missa de Angelis) with the priory schola, the highlight being the Ave Maria of Franz Biebl as communion hymn.

Some of our chapter will remember meeting Br. Peter Hanna, on candle at right... 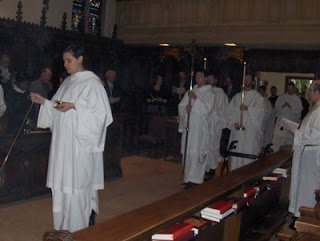 ...and here are Brs Boniface and Mark Francis (right and left)... 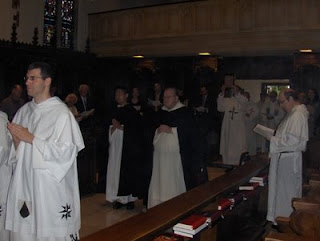 Here is Br. Boniface's mother, Kathy, with Cardinal Stafford, whom I was led to believe would be participating in the vows, but apparently is here for graduation at the Dominican School of Philosophy and Theology. 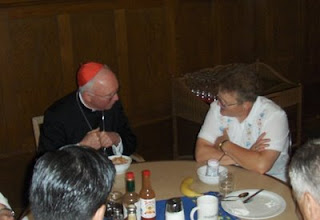 and ordinations are next weekend... sigh. frontier living does have its price. but after a flat, I thought briefly about trading in my Nissan for a faster car for the ride home... Certainly temptation abounds here!

But slow is good, too much is too fast already. at St. Bernard, Jordan Valley: 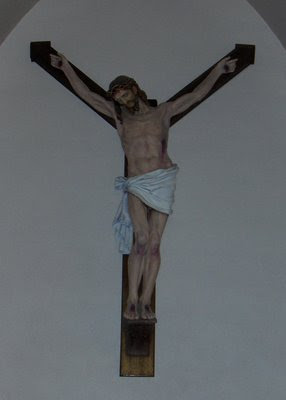 Christ is now exalted above the heavens, but he still suffers on earth all the pain that we, the members of his body, have to bear. He showed this when he cried out from above: Saul, Saul, why do you persecute me? and when he said: I was hungry and you gave me food.

While Charity is the duty of all children of God, and the charism of feeding those who are literally hungry is the particular charism of many, the particular Dominican charism is the relief of Christ by preaching his word, so that those who persecute him become his friends, and many of these same are hungry for his word, but have never heard it, or have simply rejected it. So in the spiritual works of mercy, the Dominican relieves Christ.
Posted by Mark at 8:29 AM