The schola at Sacred Heart parish is trying to learn the "Faithful Cross" portion of the Pange Lingua in English set to a score from a Polish song book! It works ok, but there are a couple spots we're not in agreement on how to handle. I found a Czech version on Choral Wiki, which is this (click for larger version): 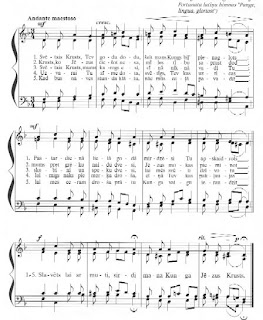 I scanned the pdf and tried to jam the English into it, but am having a bit of a problem. you will note that in the Czech version, each line ends with a single syllable on two notes, which seems the natural thing to do with the English translation... except when I try and fit it in, verse 4 just doesn't seem right in two places:

"to the immortal deity"
"to Trinity in Unity" 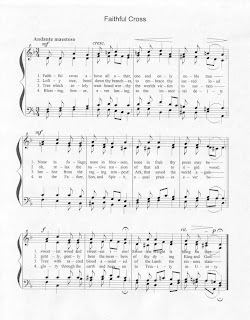 Anita (V-For Victory), our most experienced chorister, suggested singing "immor" as a single note, squishing it together, which allows two notes in the final syllable, but then to some, it sounds like "to the mortal deity" and the choir split over it.

We had hoped to do this for 40hrs devotion starting tomorrow morning, but at this point I think it's been scaled it back to doing v1 in English and repeating in Latin and leaving it at that. Anyone familiar with this music, If there is an English version of this floating around cyberspace I missed, or if you just want to take a shot at this, your assistance is welcome!

BTW, I find this setting really beautiful, it has an appealing simplicity and repitition to it, much like singing the plain chant version of Adoro Te Devote.