Requiem Mass? Jack be nimble, Jack be quick, in a couple hours we need 6 candlesticks...


So when a member of our chapter decided to honor her mother with a Requiem Mass, we set to work locating the items we did not already have, and figuring out how to make do with what we did not have.


We did pretty good finding everything, but by 10AM on the day of the Requiem Mass, we still did not have confirmed that we had located candle stands we could borrow. I had a physical therapy appointment at 11AM and was ready to trust in God's providence that they would "appear", much as everything else had.


Wiser counsel (read: spouse) prevailed, and after being dropped off at PT, Pam went to Hobby Lobby and, with their counsel, acquired piece/parts. After picking me up we went to Home Depot and picked up some more parts. We had lunch, and at 3PM with my future son-in-law's help and grandson's critical supervision began assembling. An hour and a half later they were complete, and with an extra hour of drying time in the house, they were ready to stack in the trunk of the car!


So if you are scouring the internet trying to figure out how to make the six candle stands for the catafalque for a Requiem Mass, know that it is possible in a pinch to put something together for a modest cost that may not be the prettiest, but won't distract by being hideous or by being absent.


we started with a 10" square pine base. the base is routered on the edge to give it a nicer look. these were from Hobby Lobby. to the base we attached a 4"block. those were cut at Home Depot from an 8 foot 4x4 - which meant we had to purchase the whole thing, but hey... Montana (my mentioned soon to be relative) measured, drilled, and double screwed the block to the base. 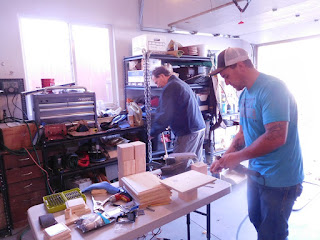 Meanwhile, I used a belt sander to more or less smooth off the roughness from the bases, blocks, and tops. I didn't mention the tops. they are 4" squares of pine, also from Hobby Lobby, that match the base pieces. 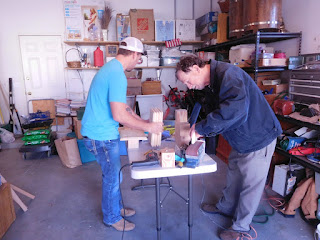 As assembly proceeded, sanding continued. we weren't bad as an assembly line!
﻿ 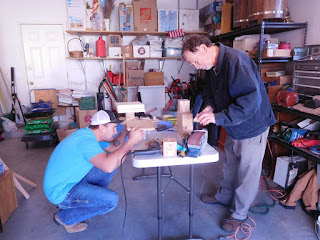 Pam didn't get a picture of attaching the main part to the base. we used a doubly ended screw. After drilling the block and screwing it half way in, we drilled the main part and screwed it onto the block. Ah, the main part. that was the fun bit. They are stair balusters from Home Depot. They had oak and hickory in stock, but the hickory was under $7 while the oak were about $10 so we went with the hickory. The candle cups at the top were also from Hobby Lobby. they are simple turned wood, and even have a hole in the center. We used a #10 2" wood screw to screw the cups through the predrilled holes in the top and spindle. 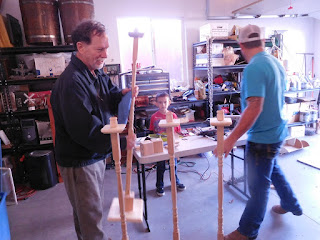 The sales clerk at Home Depot talked Pam into purchasing spray paint designed for a wood stove. There was expressed a fear of vapors flashing and starting a fire! 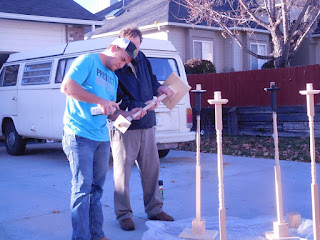 BTW, the Roman Rite bus is still in the driveway; the battery (6 years old) finally gave up the ghost... but she'll bump start rolling down the driveway backwards and I'll take her in soon for a battery and other winter service that is due.

It was only about 50 degrees outside, and the dry unprimed wood soaked up the paint very quickly. Yes I know, shame on me but time was of the essence. A light coat of paint covered well and was dry to the touch within minutes. 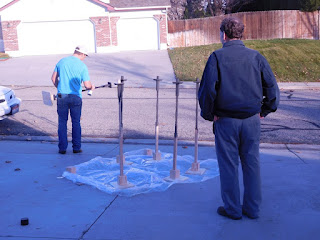 We brought them inside and put them on the dining room table (we have a high ceiling), turned a box-fan on them, and set the house heat higher. An hour later we were dressed, the new candle stands were in the trunk, and off to Mass we went! the finished result: 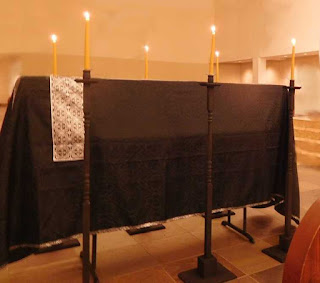 The pall was borrowed. It was beautiful. I haven't confirmed it but I'm pretty sure it's this one from Poland.