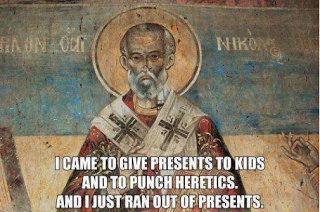 [Dec 6] is the “Feast” of Saint Nicholas of Myra, the original Santa Claus, and patron saint of micro-lenders (i.e., pawnbrokers) and bankers in general. And of thieves, children, and unmarried women, so don’t read too much into the thieves and bankers coincidence. Pawning is, of course, a form of deposit banking, in which the borrower takes out a small loan at high rates of interest, leaving a “moveable chattel” as collateral. This is in contrast to “commercial” or “mercantile” banking in which the lender gives a promissory note for a bill of exchange issued by the borrower representing the present value of future marketable goods and services. Instead of “interest,” which can only be charged on existing savings, the lender accepts the bill at a discount determined by the risk and other factors. The difference between the face value and the discounted value (assuming the bill is redeemed or “paid” on maturity at the face value) is the fee out of which the lender meets his costs and makes a profit. If capital credit insurance and reinsurance is used to replace traditional collateral, classic commercial banking represents a feasible source of financing for widespread ownership using future savings instead of past savings. Thus, in a sense, Saint Nicholas could be called the patron saint of the Just Third Way. Oh, by the way, Saint Nicholas is also noted for punching out Bishop Arius for refusing to stop spouting nonsense during the Council of Nicea, A.D. 325. And Chesterton believed Aquinaswas thinking combatively. “Jolly Old Elf” my foot. 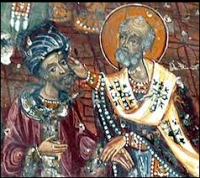