I'l liking the new Holy Father more and more, the more I read... And then there's the report of the Cdl. Bernard Law thing on day 1 at St Mary Major. encouraging!


From a 2012 interview with Andrea Tornielli at Vatican Insider (Link)

Can you tell us show the Roman Curia is perceived from the outside?
“I see it as a body that gives service, a body that helps me and serves me. Sometimes negative news does come out, but it is often exaggerated and manipulated to spread scandal. Journalists sometimes risk becoming ill from coprophilia and thus fomenting coprophagia: which is a sin that taints all men and women, that is, the tendency to focus on the negative rather than the positive aspects. The Roman Curia has its down sides, but I think that too much emphasis is placed on its negative aspects and not enough on the holiness of the numerous consecrated and lay people who work in it.” 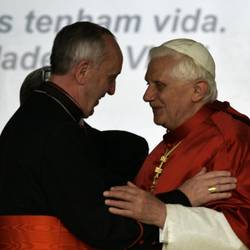