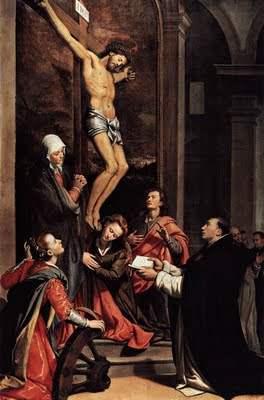 As we approach Passion Sunday, the question again bears some reflection. In order to do this, let us first cease to think of ourselves first, and think about love in its highest form, the love of the Holy Trinity. For, as it is said, the Father loves the Son, and the Son loves the Father, and this love is so perfect it is a Person, the Holy Spirit. Now there is no greater love than this, and this is the love that human life was created to enter into. So as we look at Jesus, in all he has done, his agony in the garden, his death on a cross, we see that the Father who loves the Son permits His Son to endure the most unspeakable suffering which man can inflict and endure. And the Son does this out of love for the Father, and for us, for also there is no greater love than to lay down one’s life for one’s friend.

We are confronted with the reality that there is something so much more valuable in the eyes of God than our mere comfort, and that in attaining this something, somehow suffering is a part.

If we turn our thoughts back to Lazarus, we see a bit of that Trinitarian love of Father and Son mirrored in the love of friends, Jesus and Lazarus. For Lazarus was one of Jesus’ best friends, yet Jesus allowed him to suffer and die, before taking action at the request of other friends, and raising him from the dead. To be a friend of God is to embrace the suffering which will come our way, which it will. And Lazarus means “Friend of God.”

According to Aquinas, the suffering of hell by the reprobate spirits is that they will other than what is or what is not (as explained by Abbot Vonier in “The Human Soul”). Thus, our suffering is compounded when we will against that which is or is not; when we align our will with God’s permissive will, in the sense of accepting what has been permitted, then do we find we have entered the way where the peace which passes all understanding is to be found.

I don’t really expect those who repose in the question which I began will really understand this if they don’t already, but it helps me to put these thoughts together in order to recall and focus on the source and destination of Life, before whom with St Paul we learn to say “I count all things as loss”. For those to whom this makes no sense, I can only suggest: "Ask, and it shall be given to you; seek, and ye shall find; knock, and it shall be opened." - Sound advice, I read it in a good book.
Posted by Mark at 10:26 AM