In defense of Dominic as originator of the Rosary

an interesting article from eLumen, the newsletter of the Eastern Province:

Letter to the Editor

I came across eLumen ‐‐ July – 2010…. Thank you for recommending it. In it, you made comments regarding the tradition of St. Dominic as author of the Rosary. I enclose some excerpts from my books: The Rosary: The Little Summa (4th ed.). They are from the chapter – The Papal Tradition. I send these excerpts to throw some light on your comments. My high school teacher used to always say: “A word to the wise is sufficient.”

The Papal tradition of the Rosary is singled out in official documents written by Popes starting with Pope Urban and ending with Leo XIII in the early 20th century. These documents consist of facts about the Rosary that have gone through tests of research and verification. These Popes did not accept these facts without reasonable proofs. They had learned men assist them in the composition of these papal documents on the Rosary. 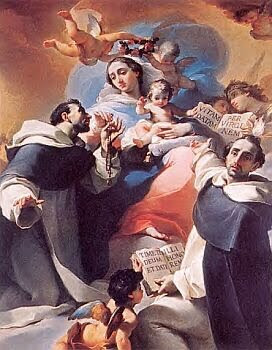