Kathryn Tucker, legal counsel for the formerly named "Hemlock Society" has apparently moved to our fine state in order to sink it to the same barbaric level of Oregon, Washington, and Montana have sunk. Actually, what she is promoting is more old school Nazi than neo-Nazi. yeah; Nazi-classic. 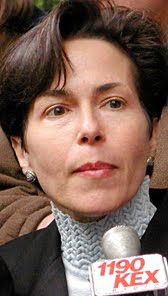 On July 17, this "little woman" will give a presentation to the Idaho Medical Association at their annual meeting, the purpose of which is to promote the introduction of assisted suicide legislation in Idaho (program here).

Make no mistake. The legislation promoted by "Compassionate Choices" has NOTHING TO DO WITH TERMINAL PATIENTS, it is about turning doctors into executioners and preserving them from liability.

Now, documenting a less subtle approach, there is an excellent new movie just out from Life Dynamics:


OK, yes, it's direct to video. No studio would release such a move! So go get informed and get yours at http://www.maafa21.com/
Posted by Mark at 1:51 PM