I just finished watching "Red Terror on the Amber Coast, a production of Domedia Productions. Production of this film was supported by the Western Dominican Province, and the project was the work of Fr. David O'Rourke, O.P.

From the web site:
http://www.domediaproductions.org/CurrentProjects.html

Red Terror on the Amber Coast 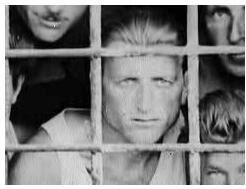 “Red Terror on the Amber Coast” documents the fifty-year-long struggle between the people of Lithuania and the Soviet KGB and their predecessors to impose Soviet control on a free and democratic, Western republic. Using filmed interviews, archival photos and newsreel footage, it describes Stalin’s use of state-sponsored terror to destroy opposition, collectivize agriculture and industry, and create a single social class all under party control. Some interviews record the long-term, armed resistance by organized partisans to the KGB and its troops. Others describe their experiences, as adults and children, of arrest, imprisonment, deportation to Siberia and the Arctic coast, and years as slave laborers in the mines and forests of the far East.

here is an excerpt of a 2007 interview with filmmaker Fr. Ken Gumbert O.P. (when the film was in production):

SC: What has been the most devastating part of making this documentary?

Gumbert: Just listening to the stories. I don’t know how these people survived. A nine-year-old girl, arrested with her entire family, packed off to Siberia to work in slave labor camps. She watched her deported family die around her, and yet she survives. And now at 80 something years old, she tells this horrific story. How can you keep from crying with her? This is the most devastating part of this film, the truth of it all and the horror experienced by millions and millions of people. It is devastating to me, the cruelty that is part of human history.