The following is from Robert Moynihan, editor of Inside the Vatican

Before leaving St. Peter Damian, I thought it might be useful to all of us to read about what Damian had to say to a friend, the abbot of the Benedictine Abbey of Monte Cassino, Desiderius, in the year 1061 -- about 950 years ago. It is his Letter 86.

I choose this letter because it sheds light on our own time.

Damian begins by telling Desiderius that he and his monks should be grateful that they are out of touch with the "craziness" of the "modern world" (for their world, almost 1,000 years ago, was "modern" to them).

"You who are not unaware of the crimes that occur in this mad age would be wise to consider that, having left the world, you should be deeply grateful to God for having rescued you," Damian begins.

"Decency and right living have all but disappeared and, as vigorous Church discipline gradually collapses, a pestilential flood of vice and depravity of every kind grows deeper day by day...

"For just as the shepherd rescues an only sheep from the ravenous jaws of the attacking beast if it has sunk its teeth into one of the weaklings in the flock, so too has Christ rescued you from the mouth of the cruel plunderer who sought to have you serve him as the world was falling apart."

The Holy Father's Wednesday general audience on St. Peter Damian:
"Jesus Must Truly Be at the Center of Our Life" 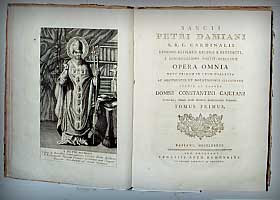 St. Peter Damian's Letter 31, unmentioned in the Holy Father's catechesis, deals with the reform of the clergy which was the notable passion of St. Peter Damian.
Posted by Mark at 10:02 AM